i actually woke up at 7 to get free food, since i had a 9-6 day today,  and they started it at 8, so i had to go early and avoid the crowds.

never had sweet artisan pastries mixed with french and argentine styles, so i decided definitely go. so glad i got there early, only about 3 people in front of me, and by the time i got my coffee, the line already had 10+ people. 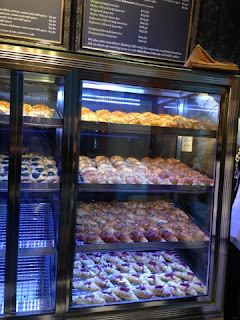 some of the sweet selections.

when i first went into the store, my first thought: so small! then i looked at the prices, and the sweet ones were $3, and it's artisan pastry, so i guess for stuff like that, it was ok. 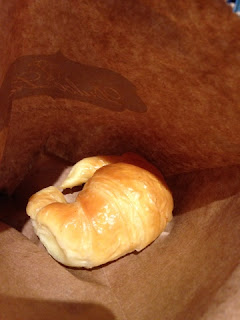 obviously they give the cheapest one for free. yep, really small, but it was one of he softest pastries i've had/ slightly sticky to touch, but not too sweet. i still think i like my traditional savoury crossaints with flaky patiserrie. i was going to buy other flavours, but then i thought it was get squished in my bag by the time i got home at night. then i thought i would go again at night to see if they had anymore free ones left, but then ceebs. also, i just saw the Dulce Luna on York St the other day. passed it everyday, but only noticed it recently. it's soo small compared to the Pitt St one. 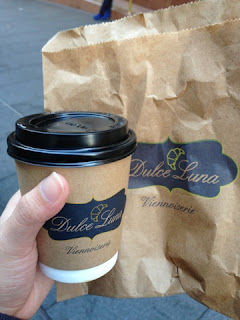 it felt lighter than normal in my hand. i guess i would have like a bit more milk and foam. the coffee was alright, but it was a tad liquidy since imo, there wasn't enough milk. also, the lid thing is harder to drink from, since the brim is more flat compared to other places.

matt's MC bread is soooo easy to make! will make it in the summer break, and hopefully strong flour isn't too expensive. yay for Matt and his cheat's recipes. i have quite a few things on my mental to-bake list (:
Posted by Elisa at 11:46 AM