i was so pumped once Bitter linked me to where free pies were in the city, but when i went, they were all given out ): i don't have anytime during midday, and i promised myself i won't skip lectures for food, since a one hour lecture is about $60, a pie is $7.50, and in the end i have to pay back my uni fees, so long term, going to the lecture is more beneficial than getting free good. now i'm craving pie, well actually black star's pie. hopefully go this week. i hate how my timetable changes, it's actually just this one course which changes times and classrooms/locations, have to check up every time we go somewhere, so annoying.

but my day was made by free hash browns at maccas! haven't had one in agessss. no lines and freshly made (: missed the bacon and egg mcmuffin last week...

the m2 finally finished last thursday, and the price are ridiculously. it used to be $4.95 one way car, not it's $6.02. i've done the maths: m2-two ways, lane cove tunnel-two ways, harbour bridge-pay one way, all up $22. that's almost a my multi two ticket and you haven't even counted the cost of petrol and parking. yep, bus it is. three lanes is so good, esp with bus lane. no more traffic jams, can sleep in more for 10mins/take less time to get to uni (: 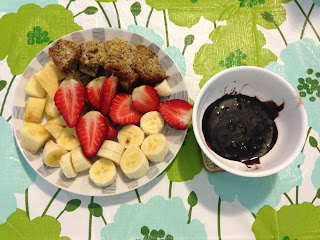 melted some remaining chocolate from yday, cut up some banana bread from two days ago, bananas, strawberries and apples. tbh, you can dip anything in chocolate. i have kiwis at home as well, but they're more annoying to cut up. so delicious after dance (: last time i hade home made fondue, we used those melting/baking chocolates, but either way, you have to eat quickly since there's no candle heating the chocolate to prevent it from setting.

i also want liquid nitrogen ice cream. i've had it once before, but i want it to be made by heston, lol. he put around 10 vanilla pods for one serving of ice cream! that's well over $20+. obviously he couldn't lose today, he has 5 michelin stars, but seriously, i wouldn't mind eating christina's/daniel's dishes. actually i've always wondered, what happens to the rest of the food on masterchef? eg, daniel serves up one perfectly cooked egg, but he made around 4 other perfectly cooked eggs. wonder if people who wash dishes also get to lick plates/try the remaining elements for a dish which weren't used.
Posted by Elisa at 11:29 PM