uni has more people during break compared to exams. actually, there's just heaps of kids running around, and heaps of tourist/asians taking photos.

easiest 10 bucks made today. getting paid to eat. the view was also pretty good, could see the planes flying off/beach etc. apparently in the end, she told me they were actually researching how much a person weighs and how much they eat, not to see if we were hungry and how much we ate, trippy. i had two massive cookies, they were alright, not the best. oh wells, it was real money, unlike when i helped out with this other thing and they gave us gift vouchers. it was a pretty easy job scanning stuff, so i shouldn't complain. i don't go grocery shopping anymore, so just gave it to my mum in exchange for going out to eat this break. i'm on a roll, everything (except for the yum cha thing i had last year) has been $10 or less from groupon. yay more food adventures to come (:

since i was already in the city, i decided to get my third and last free moochi. i've had all the flavours except peach, salted caramel and chocolate from moochi now. tbh, i think moochi has the worst flavour and texture out of the places i've been so far, but i have been there the most. why? because it's the cheapest, and i've managed to go to a few grand openings and i have had many free froyos from there. 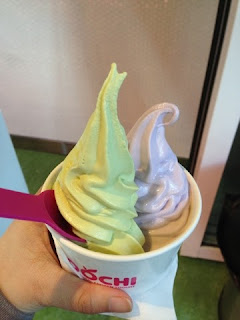 last time i had taro from george st it wasn't bad. today, argh. first of all, look at that serving (it was bigger than unsw opening but still...) different sizes. (scroll down a bit, and the 2nd free froyo i had was a decent, almost equal serving). THAT TARO TODAY WAS SICKLY SWEET. you could feel that sugar in your throat. (can still taste the sweetness left behind in my mouth =/). horribly sweet and yes, you could taste taro, but it was very subtle since the sugar overpowered it. green tea (which is naturally supposed to be bitter) wasn't very strong, and i was hoping that the bitterness would balance the sweetness form the taro, but it didn't. i don't really like wasting food, so i managed to finish that taro. which is why, as i have said many times, yogurt world is so much better/best i've had so far. there taro was pretty good, not overly sweet and tasted (and looked) natural. i've had moochi 6 times this year, and only once i had paid full price. time to use them noggi vouchers...

next week i will be in sooo much pain. did i tell you, next week was the optimum week for me to get teeth taken out. i had to balance it between: parties, dinners, church stuff, yum cha, lunches with people, outings etc.
Posted by Elisa at 10:19 PM