i've had the opportunity to have real souffles at higher end restaurants, but there were other desserts which were more appealing. 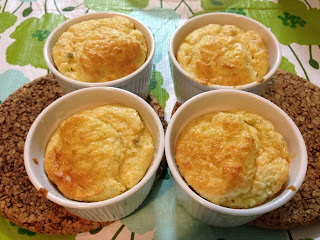 they actually rose up like they do in pictures! except they deflated quicker than expected once they were out of the oven. the texture and consistency was what i imagined, however it tasted more eggy than i would have liked. the recipe said to use 1/4 cup and 1 vanilla bean to serve two. taking off the shells of the nuts aren't hard, it's getting rid of the layer of skin which took forever, so instead of using 1/2 cup, only had 1/4 cup. i don't have a mortar and pestle, so i improvised by jjust finding something hard and crushed the nuts against a chopping board. also, i don't think i infused the vanilla bean properly in the milk, so i felt like i wasted the bean. maybe i'll just add some essence next time. if i was to follow the portions, i would have to use 2 beans, which is a waste. maybe that's why people do savoury souffles since you have the eggy flavour there already. i didn't want to use chocolate because chocolate is boring.
Posted by Elisa at 11:12 PM

Email ThisBlogThis!Share to TwitterShare to FacebookShare to Pinterest
Labels: souffle