first time making creme brulee. used the masterchef recipe, and it's so good! they have a video for it (wow, you can really see that george has lost some weight this series), and the measurements are better than other sites. they use 6 egg yolks, and i decided to try it out and make half the recipe, so it was easy to have 3 egg yolks. some recipes use 5 egg yolks, and how do you get 2.5 egg yolks? also, masterchef's one uses the less sugar.

it was so simple making it! the hardest part was probably washing the whisk (and the sugar crust on top...will get to that later). no fancy equipment needed. i decided to not use my precious vanilla beans since i was halving the recipe/testing this recipe out. instead of using paste, i used essence. it still worked out pretty nicely (: the vanilla flavour was there (: couldn't be bothered to get rid of air bubbles because you need a blow torch, or else you put it in a ziplock bag, then pour it into the ramekins-ceebsss. 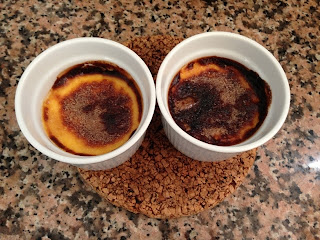 the sugar layer on top was thick. that shouldn't have been a problem if i had a blowtorch since the heat is more intense and you can control where the heat goes, and the crust would have had more of a "crack". i have three ovens at home: the one which comes with the kitchen, a mini oven and a round convection oven, all of which are capable to grill. i decided to go with the mini oven and see how the grill is on it, since i never grill stuff. after about a minute, it started to caramelise, nek minnit-it's black ): next time i'll put less sugar on it, and not use that grill. that mini oven is getting really old, like the heating tube thing is starting to "bend" on the right, resulting in the right side being hotter than the other side, thus it came out blacker. maybe caster sugar would've been better than brown since it caramelises slower...i would love to invest in a blow torch (even though you can get it for less than 20 bucks), but i would rather buy more macarons with that money. or i could just borrow someone's...i don't know anyone who has one though. otherwise, they still tasted fine.

every time i've made something from masterchef, it actually turns out better than expected. this series george/gary's stuff are super complicated, like most of the time, you can't buy their ingredients in coles (they used to claim that everything they made came from coles, but as the show progressed, dishes get harder, and not everything came from coles). now that matt's cooking this series, his recipes are simpler for the super duper amateur cook, and they're healthier. when they all made mousse, matt's one had the less sugar, chocolate and no cream, and it was the simplest method. even his mash potatoes yday had no cream or butter! will try that mash when if i get a chance to buy that types of potato...

i've been looking at a lot of food lately. that simon guy on urbanspoon-where does he get all the money to go out and eat? he's been everywhereeee. i think food blogs are cool, but i don't have the money to go out to eat (apart from during the breaks since i don't go out during semester).

uni starts next week, and i still have unknown locations for some lectures/tutes/labs. noooo, biological chemistry and taught by half chem and half babs staff. noooo babs, worst subject. all that bio chem we didn't have to know for chem, but did for babs, well we have to do more deeper chemy-bioey stuff. chem itself is alright, but mixed with bio =/

side note:
-finding the perfect bright red lipstick is harder than i thought it would be.
-where does everyone buy there ink from? it seems like getting a new laser printer is cheaper than buying the ink cartridges ):
Posted by Elisa at 11:25 PM