i've been eating out all day except for my avo toast in the morning, and all i've had to is rice noodles, but i love rice noodles, so no problem today (:

day started off with walking to "thai town" the chat thai closest to Capitol. same dishes but cheaper than   Westfield by about 3/4 dollars for almost most dishes, turns out they were renovating ): 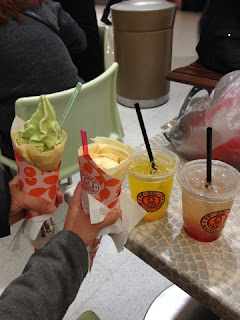 the green tea had a soft seve texture, and it looked nice visually, and tasted pretty nice. baileys was pretty good, although i would have preferred it to have more alcohol (but obviously they can't put more in or else it would go over the limit of how much an underage person can consume alcohol in foods i guess...). ice creams in both crepes were generous servings. the orange and mango was kind of sweet, but the slight sourness of the orange balanced it. the pink grapefruit was more sour than sweet, and didn't have much "grapefruit" flavour. these sodas were more sodary than normal soft drinks. bad thing is that it's all take away, so you have to find a table in order to take a photo of both stuff. the crepes had this plastic packaging on the outside which is good since sometimes the ice cream goes/leaks through the crepe. mine didn't, but my mum's did....i would never buy crepes full price in aus. 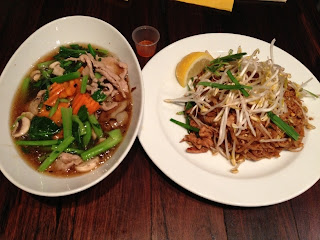 chat thai looks good if you get the expensive stuff, but it's overrated imo. the galeries don't have much seating since it's in a food court, so the few dollars you save comes at a cost of a least pleasant dining experience compared to Westfield, but at my stage, i don't really care about ambience, i just care about food. we went after peak hour, during peak hour they have those ropey lines, and have lines of about 20 people from about 12-2.

servings were very small compared to my last thai experience at pennant hills. luckily we filled ourselves up with dessert before. the raadt naa had very fat/thick noodles, thicker than chinese ones. the sauce had this sweetness but salty at the same time and not as thick as how chinese people do it, but there wasn't a lot of noodles, and after a while, you crave water. this pad thai was again, smaller than The Seat by a half. no joke. there wasn't a lot of peanuts, so you don't get that crunch/texture whilst having the noodles. the flavouring was less than my last padt thai, but this also had less oil which is a plus. 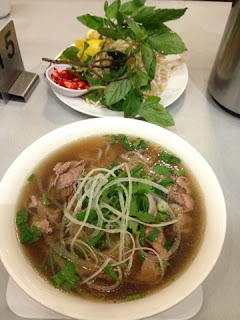 not rare enough. i remember in hk when i had pho, it was so delicious and big and tasty and cheap and the beef was actually rare when they gave it out, and the soup was hotter than the one above so it still cooked fine. this soup wasn't as hot, and servings was smaller than Thai Riffic when i had rice noodles in soup. there were a lot of sides though, and the broth wasn't overly flavoured, so it was drinkable to an extent (i try not to drink too much broth since it's really unhealthy). it was alright. i have yet to go cabra and have pho there.

i would have loved to stay longer, except i don't drive to parra since I don't know where to park and traffic is bad around westfield, and the last bus back home was at 7.25. last time i trained it from parra to penno, took 3 trains, and it took over 2 hours. it's supposed to be a 30ish min drive/40/50ish min bus ride depending on traffic, and my dad went on a business trip today, and my mum doesn't no how to drive to parra, so busing it was my only option...how was the cake? haha.

i've broken my "less than $10 a meal/plate/drink/item" today. personally, i think city food is cheaper than castle hill/parra. their cafes are so expensive, even if they're just normal cafes. like 13 for only a sandwich at a cafe in towers, and it was pretty basic. so yeah, if you know where to look, city food is "cheap". ie for day-to-day lunches/dinners, not including high class restaurants. there's this new thai place i walked past today, 6.90 for a curry/meat with choice of sauce with rice, and they were pretty big dishes. i had my mind set on chat thai, but should've gone there (even though out of the 10 things on the menu, only 1 thing had no curry or chillies)

re-watched masterclass online and NOT A SINGLE AD DURING THE WHOLE EPISODE. i've missed masterchef the whole week this week and have been watching it online at like 11pm, and every ad break they have on tv, online they have 3 minutes of ads. last year it wasn't like this, they sectioned off the episodes so you could quickly skip the middle talking parts, and there were way less ads. people always comeback, except in professionals when they said there was no second chances, and no one actually came back.

you know the fam of will, kate, and george, they have really generic names. boost has their name game tomorrow for those names. and wow, kate looks no different facially before and post-preganancy, and she still has retained her skinniness in her legs etc. i wonder what they feed her to be so healthy and able to wear heels at 7+months and also a day after she gave birth. you know what i wonder, do they bother to do her hair/make-up when she was giving birth...?

updated my zumbo's post, so if you would like to know what i thought about the other half of the box of zumbarons, well scroll down (:
Posted by Elisa at 11:40 PM