well that was an interesting experience. i've had a bbq in the rain at home before, but it was a light shower so it was alright.

but this: (for those of who you don't have fb) 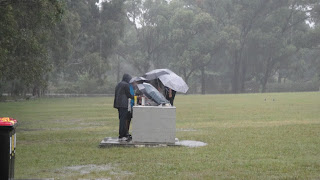 it really made my day.
and have you seen this? uws's parking lot
i wonder what our school would be like, last time it rained hard, except this time i've heard more flooding around places, our lake at school is probs full.
i never got my meat, but there was meat at home so it was alright (: i really want to go someplace like hurricanes now, maybe i should persuade relatives to go there and shout me when they come next month =D
so, didn't do much today, except spectate guys playing gridiron in torrential rain and attempting the bbq. it was actually well orgainised, like everyone brought something and there were heaps of food etc, it would defs gave worked-if it was sunny. maybe next time
i survived driving through parra. even my mum hasn't done that (don't think she ever will unless i show her personally) the roads are SO BAD in parramatta and surroundings. many many potholes. like the potholes in my suburb, they get filled back in like a week, but the size of the one's in parra seem to have been there forever. i don't really like parra park. it's one way, so if you miss one place you have to go around the whole massive thing again. luckily i didn't miss it. and usually, bbq's have a shelter like in bicentennial park (i think), but its outdoors so there was no way decent barbecuing would happen.
my legs hurt and i don't know why.
some things i hate: people who chuck out good food, especially if its not opened, next time i'll volunteer to take it home, people who cough incessantly without covering their mouth-please i really can't get sick this year i have something called HSC (and so do you...). if that happens at home, i throw i mini-rage since i really don't want to get sick because other people are thoughtless about other people's health, people who try to get other people wet, people who don't answer you directly (which then implies the opposite of what you asked and the in an indirect way you get your question answered)
just some little things i noticed today, not naming any names (:
yesterday was the first day i stayed at home without setting a foot outside, the last time was the day after the horrid end adv exam.
ps. i don't like uploading pics on blogger because it's soooo slow, and videos on fb takes foreverrrrrrrrr, and so do photos on fb, so i really ceebs unless i have a need to show it.
Posted by Elisa at 11:22 PM