awww, it's so sad to see the kids go. i think i'll really miss my kids. they were sooo cute. like i had a new person on the last day, so my youngest kid started explaining what he learnt throughout the week, which shows the kids want others to know about the word of God through their easier versions of memory verses and bible stories.

and the last day was a wierd, wild and wonderful fashion show. i dressed as a tiger (: except i didn't have a mask ): i never had an animal costume when i was small...the kids costumes WERE ALL SOOOOOOOO GOOOD!!!! there was a preschool kid with this jumpy giraffe thing and costume. he was so frickken cute!!! like one of those jumping things we had in primary :') 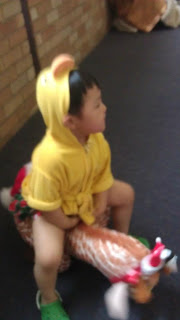 food was nice as well. had an "asian feast" with noodles in these cute takeaway cardboard boxes.
and the one of our pastors brought 2 snakes! none of the kids were scared. i haven't touched a snake in so long, so it was nice (:

then packing up the set was a tad sad. but it had to be done. there were soo many toy pandas left around so my bro got one (((:

last year after kfd, (kids fun day) we went ewood for a korean bbq buffet which was cheap and nice, so this year we decided to go ewood for koreon again, but that place closed down. so we went to this place called ingastoy or something like that, and apparently it's ok.

so the prices were ok,

we sat there and then waited for others, only to find out of our 4 tables, only one could bbq stuff. so we had non bbd and bbq side. we waited 15mins for them to come to give us  cutlery. then took 10mins to call the person to order. then another 20mins for side dishes to come. and there weren't even any re-fills ): and the guy slipped his hand and a whole dish of things splashed on everyone, and he only gave us free tissues. then waited 1.5+ hours for 4 dishes OF RAW MEAT. YOU DON'T EVEN HAVE TO COOK IT AND IT TOOOK SOOOOO LONG. yeah after 3 hours, we decided to eat something else and only have 4 plates of meat. so it was 9 and then the meat came and it was sooooooooooooooo small. waited another 15min for gas. they didn't have any so we had this dodgey bowl of coal and this plate thing over to cook which was concave down so the meat slipped off.
then someone went to order pizza from eagle boys. they are really yummy.
paid 8 bucks for 7 tiny pieces of meat.

went there and were thinking of where to eat.
and found this place. 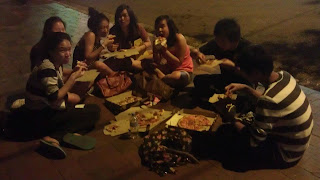 eastwood steets!!! we were soo hungry by then. eastwood streets are really dirty but we weren't going to climb over the fence of the primary school to sit on their seats....
so a new experience, and a day i would remember the horrible service of that korean restaurant. they only had 2 twi waiters and it was kinda big inside.

the story was longer, but i'm watching tennis!

nts: peri peri chicken is spicy. i love how they have tomatoes on every single slice, how considerate (:

i cannot believe i still remember the side streets that my mum used to take when we were little and ewood was like my towers...i think i'm good at recognising streets if i don't have a gps (: