I love going to weddings, if you didn't know already. When I was young, I used to just tag along with my mum. I just like seeing other people happy and just good feels. It's always so amazing seeing a couple united under Christ.

I liked the songs they used during the ceremony, and matching dramatic Christian music to walking down the aisle. First time going to a wedding with no program, but I guess cause they have big projector screens so can save paper.

Also first time going to a reception. There were so many tables, 27 tables of about 12 ppl each table. I  think about half of it were friends of their parents. 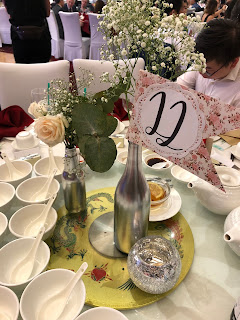 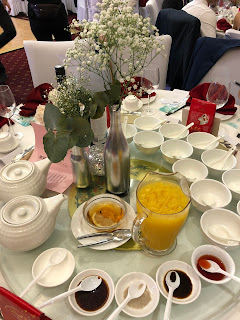 Flowers which match the bridal bouquet as table decor, and they had cute bird salt and pepper shakers as bombonieres. 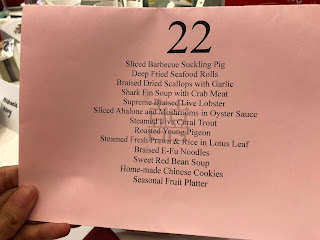 Haven't had Chinese food in a restaurant in a while. It was mini servings for each course. It was nice, but not super filling. I guess the older you get, this sort of not-too-full stage is good, cause bloated stage is bad. (Can't believe as a kid I would always eat until I was bloated). 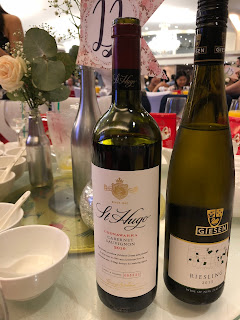 One bottle of red and white for each table plus oj. One of her friends spray painted all the bottles and did the table number deco. I feel like if you have friends who are willing to do stuff, you save heaps of money, but if you're like and you don't really have friends, then you either do it yourself or pay someone to do it. She now has over 54 bottles in her house, and once they touch it scratches easily. We were joking how whoever is getting married next can reuse the table deco.

I do find the 'younger generation' are a lot more frugal, so I guess it's become more of 'the norm', but what is normal anyway? It's cute how people help each other out in weddings. Like even how to plan a wedding. Who needs a wedding coordinator /event planner when you can just ask people who have been married before you. Like I was pretty much the first out of my circle of friends to have a 21st party, and thinking of things to do etc, whereas people after me can use those ideas but don't have to think as much as to what they want to do. I feel like weddings are quite similar to 21st, just like 10x bigger/more expensive...actually my 21st wasn't cheap either...At this rate, if/when I get married, I can probs just borrow stuff from other people if they haven't chucked it, then use my 21st probs for photos....anyways....that's in the super distant future and I just need to graduate first... 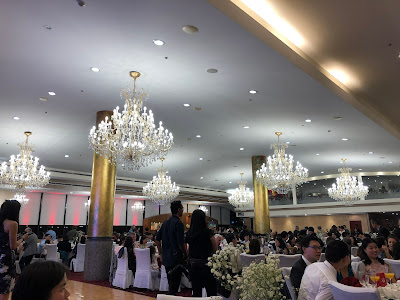 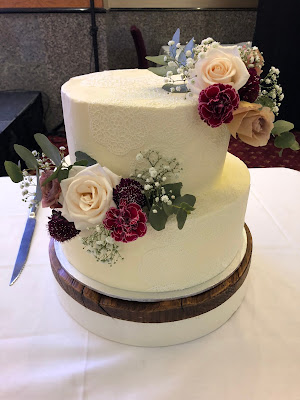 People were right, the cake doesn't get eaten. There just wasn't an opportunity to cut and distribute the cake...maybe at Western receptions they serve cake after dessert maybe...? It's a nice and simple cake, looked like chocolate inside when I walked past it sliced through...I guess there's no point getting something which taste good quality since people will leave before it's even cut....are fake cakes even thing...? I guess there was a lot of elderly who wanted to leave early, so they left as soon as they started the dance floor, but couldn't dim the lights or else they would trip walking out...

The best part about the reception imo are the speeches and first dance. The speeches were really touching and funny at the same time. Like her dad was quoting AMP statistics about how kids are expensive to raise ($500 000 each), so $1mil for 2, and saying what you can do with a million dollars and all these investments. At the end of the day, children are worth more investing into than the other stuff. Even though her dad isn't a Christian, I think you don't have to be a Christian to know that yes you can invest in materialistic things, but will it fulfil you? Not saying having children would fulfil you, but parents always say it's worth it. Too bad I don't have any life long close friends....which is the same reason as why I didn't have speeches at my 21st cause I have no friends...well I'm grateful that the friends I do have are still close.

They didn't use Perfect for the first dance haha, but used a HSM 3 song, Can I have this dance? It was so sweet, and they had lifts as well! You can be a good dancer, but it's really the choreography which makes you good. It's such a cute song.

I'm just thinking how did I used to memorise 3-5min dance routines, and 2-3 routines each time (some girls have like 10 routines), but like partner dancing, all eyes are on you, and I'm like, how do you remember the steps? I guess with practice my brain would start working again in that sort of 'arts' since my brain is like always trying to memorise optomoptomoptom.

Email ThisBlogThis!Share to TwitterShare to FacebookShare to Pinterest
Labels: weddings