I must admit, I was on a roll with free food today, and never had this much ice cream in one day (apart from maybe last year in Tokyo). free Ben and Jerry's day today, and looking back at past post, this is actually my 3rd one. Went in first yr, this yr and last yr for Ben and Jerry's free cone day. Throughout the years they have given out free tubs in the city, so I have managed to get more free ice cream from them. I actually do occasionally buy their ice cream when it's on sale at the supermarkets.

First time going with no uni and arriving just after 12pm, meant there were literally no lines. The line moved so quickly even at 12:30 that I couldn't finish my ice cream in time while relining up. Last yr it was about 15min/scoop, this yr was 4 scoops in 25min (i.e. new record). Ended up getting 5 scoops, and was super full at the end. The serving size seemed bigger than previous years as well, but maybe cause I was there early. Was secretly hoping for smaller serving sizes so I could try more flavours lol. 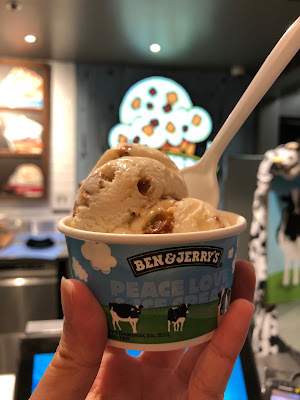 The salted caramel wasn't as prominent, but I found the almond brittle a bit too sweet/chunky. It was quite smooth for an almond milk based ice cream. 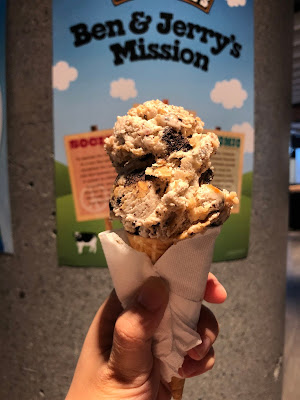 This one was hard to eat, since you try to lick it and it topples over since the ice cream isn't binding everything together. It's very peanut buttery, and overwhelmed the vanilla base and cookie chunks. It's a really heavy and sweet ice cream. 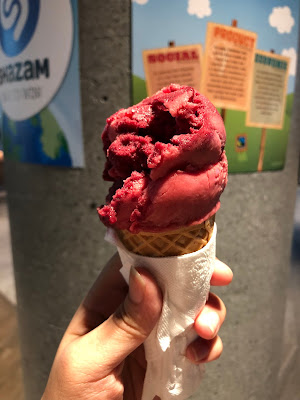 I've had this flavour a few times, but I needed a sorbet to cut through the heaviness.

Oops, forgot to take a photo of this, and forgot to save my snap chat. This was a lot lighter and smoother, and did taste like chocolate milk. I remember I had the Frozen Flakes, the other cereal flavour last year, but now trying the chocolate cereal version. They didn't have the flavour from last time here, so some flavours do change regularly. 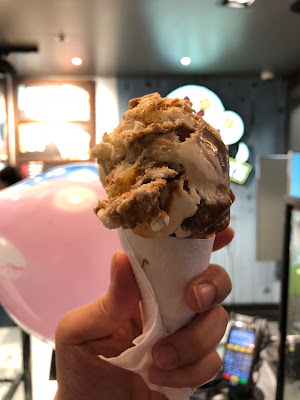 By this stage I was actually stuffed, but I still wanted to try this one since it had blondies in it. The salted caramel was super thick and heavy, which made it hard to finish. Surprisingly the brownie bits weren't actually that sweet. 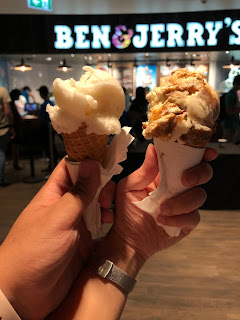 BW came just as I was pretty much stuffed, but thank goodness we got a lemon sorbet to help cut through all the sweetness and just add some acidity. It was a bit icy and not as smooth as the berry sorbet. 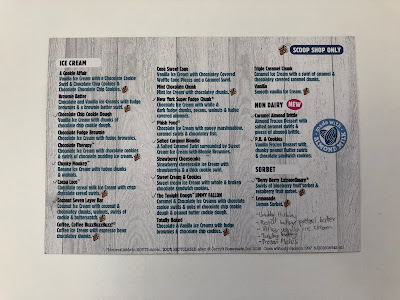 I'm sure I've had more flavours than the ones I've ticked, but forgot the name of the flavours I've tried.

On the way to Carriageworks, passed by insect ice cream. i've had some a few weeks ago, but the flavour I wanted ran out, so even though I was super full from 5 ice creams, I still love trying weird things and decided to get some, plus there wasn't a line. I don't mind eating these sorts of insects since they're all farmed, rather than 'wild,' whereas if a fly touched my food, I would tend to not eat it since it's wild/alive. 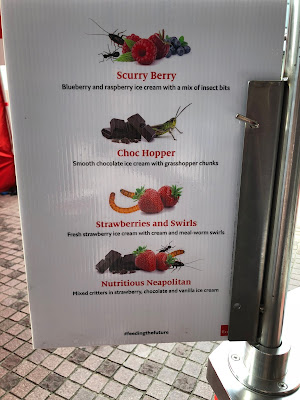 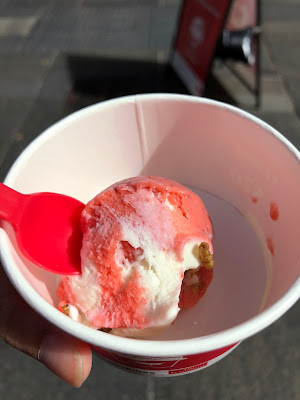 This was the one I had a ew weeks ago. The meal worms were tasteless, and added a nice texture without being overly crunchy. 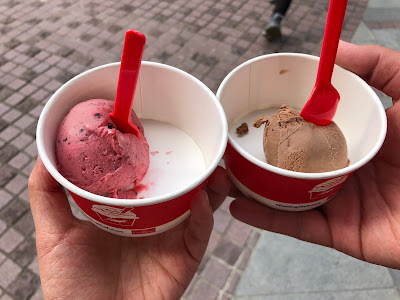 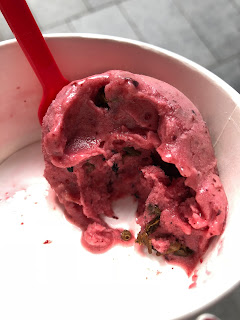 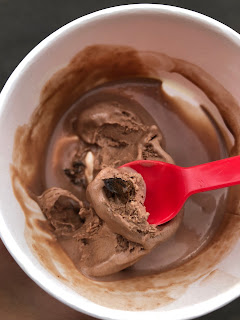 I wanted to try the Scurry Berry one last time, and luckily they had it there. There's just so many insects in it, why wouldn't you want to try? The ants did look a bit larger than normal, and there were so many crunchy bits in it. The grasshopper also had larger chunks in it, but I didn't really finish the ice cream since it was just average chocolate. You can't taste the flavour of the bugs cause the sweetness in the ice cream covers it. The insects are all 'dry' and just have a crunchy texture. 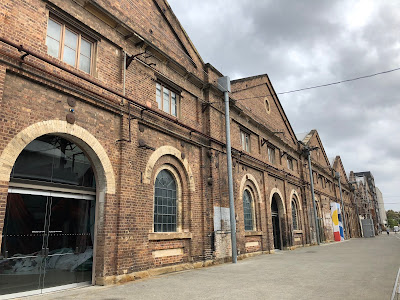 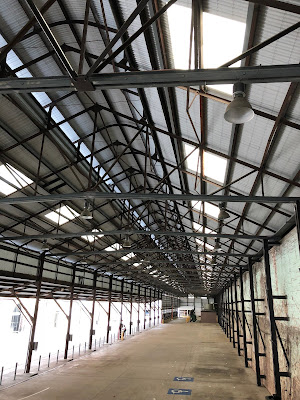 I've never been here before, and always see photos of markets here, but really, who has the time to go to markets at night time? Night time is prime time for study time 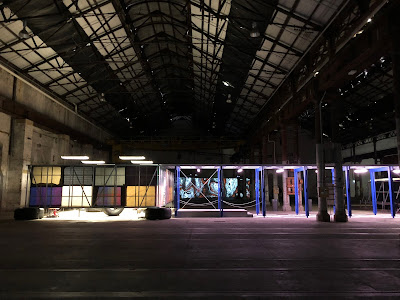 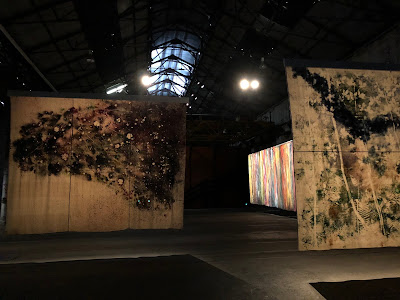 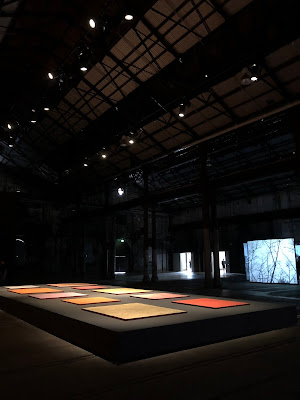 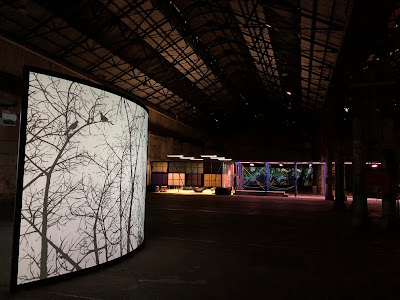 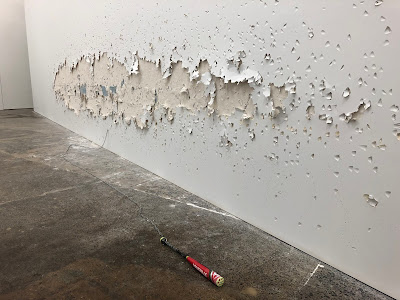 This was my favourite, you use the baseball bat to hit the wall as loud as you can. Since it's in a warehouse, the sound echoes. I hit it once softly, then bashed it again, and wanted to keep hitting it cause I got too excited, until the person was like, only allowed one go, and the wall has to last till June. Didn't;t manage to make a dent in it though....I like interactive artworks/destroying stuff you're allowed to haha. 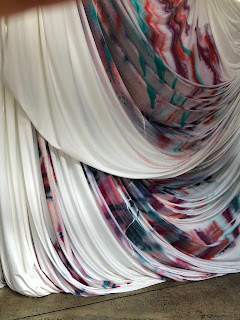 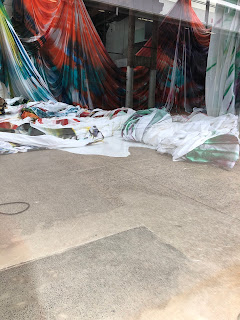 I thought this was part of the Biennale, but got here too late since they were deconstructing these massive cloths with paints on it. It was still here on the weekend, but I should've done my research to know that this artwork was part of something else.


Catching peak hour trains at Central is so cray. Like even though I live in a whole, at least I get a seat, and the people aren't rushing/pushing, and there is decent air con on the bus. Didn't realise trains were so crowded, even though every 3mins they go to Parra. 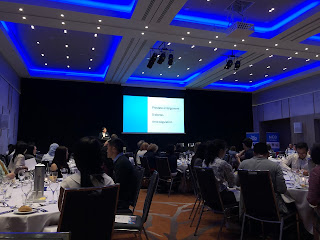 Decided to go to a CPD event, even though I wasn't officially invited, but the person organising it still let me go even if I'm still a student. Yay for free 3 course dinner and drinks. So many smart opthals there. There were quite a lot of people, around 120ish, 10 ppl per table. Event was sponsored by an IOL company amongst others, so not surprised the last talk about IOLs was the longest. The last time I was here was about a year ago when the Park Royal just opened and we had our work dinner there. There were drinks on arrival which is always nice. I think most people were driving so not many people had alcohol, so I felt weird have a couple of glasses. 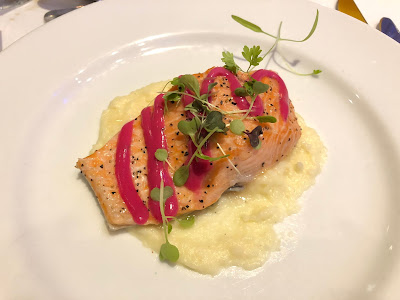 Trout was cooked well, but I found the puree lacked some flavour. The beetroot looks pretty but wasn't the flavourful either, but that's ok since I'm not a beetroot fan. 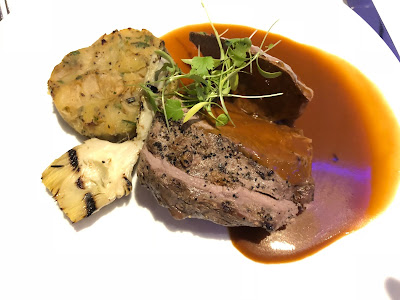 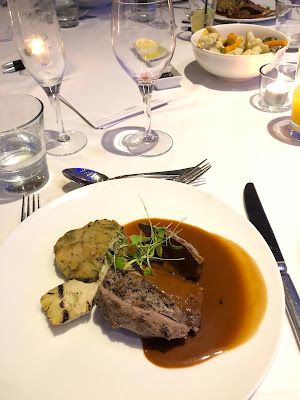 there were shared steamed veggies sides

I think cause there's so many people, it's hard to get the food piping hot. There was a decent chunk of lamb, but i still feel like it was a bit dry since I ended up using all the sauce and wishing there was still more. The sauce wasn't actually salty either, so although it looks like a generous serving, the slightly overcooked lamb needed more of it. You could see the thyme in the potatoes, but couldn't really taste it. Ended up having sparkling wine, red wine, and a lemon lime bitter, but it didn't have a slice of lime in it, whereas other people's did. 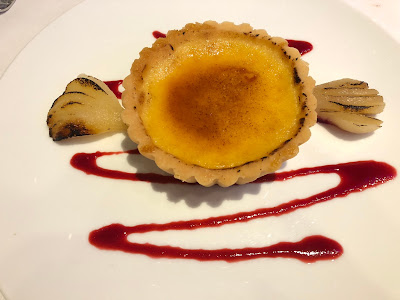 I didn't want the other dessert with the crumble and ice cream since I already had heaps of ice cream before. This tart is nothing like the Bourke St Bakery creme brûlée tarts, and I can make a better brûlée than this. There wasn't a hard top to crack through, and the tart itself was more solid and cheesecakey/bit floury, rather than a smooth custard. Didn't finish the pastry either. I tried a bit of the crumble which was more moist and soft, and not overly sweet.

I think if I did move out of Sydney for work, I would miss out on all these free CPD events and food.  Sat at the back corner, which meant we got our food last. They pretty much talked for 2.5 hrs while we ate. Ended up bumping into some optoms I work with.

Let's hope I don't get diabetes...