so much has happened since i last blogged!

i know what i fear now, failure in exams. just uni exams.
in high school, you can't "fail", but in uni you can, and i can't fail since it would mean i would have to wait next year to repeat...

i know i should have tried harder. never again will i cram visn into four days before. four days is not enough time. 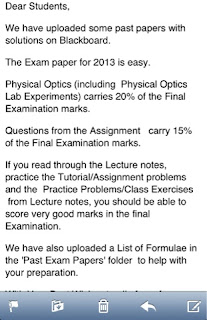 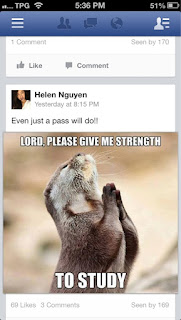 yes, even a pass is fine for visn, no jokes. we were still learning stuff in the last week when there weren't supposed to be lectures, and the last few things they taught were very rushed, mind you, this is the rushiest course, they maximise the hour. like she's always like "there's two minutes left" we can finish this, and doesn't stop 5min before the hour, but 5min after. we have four hours of visn lectures, so the content so greater than babs and chem. for maths, even though it's four hours, they talk and write stuff at a slower pace. there aren't any recorgins for visn lectures

argh, now i am really really scared i'll fail. yes, this test was easier than past papers, but it doesn't mean i  could do everything. i forgot how to do some stuff ): and also still don't understand stuff. defs lost at least 20/60 marks. pleassssssssse passss. i'll make up for a credit next sem...they still haven't posted up our marks for test 2 which we did in week 11. people say that they'll see how we go in the finals, and maybe scale it. pleasssssssssse scale.

in my mind, i don't think anything scales. i had a horrible seat today. iw as in the hall with fancy lighting at different angles,m and my seat was where there was a lowered ceiling, so three of my shadows formed on my page and was very distracting. next time i get a crap seat, i'm going to ask for a swap. and for babs i was near the front door, so people in and out, very annoying.

i feel like i failed maths even though the paper was doable. babs, idk, some weird questions, and chem, i forgot how to do some stuff as well, and guessed a lot of mc. mc is a love/hate relationship.

i told my mum yesterday that i would be going out to eat since i would be sad after visn exam. seriously, majority of people, well you get the feeling, they are hoping to pass. for chem and maths, people promptly answer questions asked on fb, and i didn't even know a babs group existed until after the exam, but there was no real need. on our optom group, people asked, 150+ people seen, no one answers, since no one knows, and even if people try to answer, there's always someone who queries it, and then everyone become unsure since no one knows the real answer. oh, and the lecturer was still uploading answers yday arvo....so much stuff they couldn't cover in time...

pleassssseeee pass. i am still worried from the exams, i have been doing work consistently, but argh, it's uni, and only the finals really count. turns out my finals range from 55-64%. gg if i don't pass. please give sympathy/working out marks.
Posted by Elisa at 11:29 PM