i have finally been to chef's gallery! after staring at it every thursday and friday night for one semester! went for lunch since lunch servings are cheaper.
personally, i think it's for "guai loi" (well it's for non asians but run by asians) since there were not many asians there.

the food was nice (: i had a lunch set of regular hand made noodles w/ pork, black fungus and cabbage and other stuff. also there's some dim sim (deep fried wonton), some chip like things, and mango pudding in the middle. at first, i thought it was some sort of dip, and tried to dip into it with the chips but obvs failed. the mango pudding was very different. it was orange-ish instead of typical yellow, but it was really mangos (not canned ones, and yes, you can tell the difference). had soy milk for an extra dollar. the guy asked hot or cold. people my age would obviously opt for the cold option, and people like my mum opt for the hot option (hot asian soy milk isn't as bad as it sounds), but at least the guy bothered to ask. 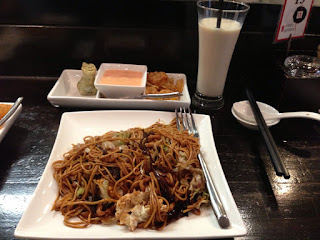 the handmade noodles were very nice, different texture to machine cut noodles. more...springy when you bite it...and not too oily. you could see the people make it. there's this one guy who lengthens the noodles, he looked super bored, and it was only 12pm. then he throws it into boiling water to cook, and guy stirs it a tad then gives it to another guy who quickly stir frys it. so yes, production line, and it the dishes came out pretty quickly.

other parts people were prepping meat, making dumplings etc. i saw at least 12 chefs just for lunch. they have like a subset kitchen instead for the "messier" or less appealing kitchen work, i think.

the signature "piggy buns"! look! one is a guy, the other is a girl. yes, they are overprice, $4 each (well some macarons are $4...) but they were soo cute and delicious. i do think they make their own dough and sesame paste. the dough was soo soft and yummy, and the paste inside oozed out. but i don't think i'll have it again, unless i go there for dinner, where they have a whole playing field of pigs and "totoro marshmallows" and green sugar grass and wafer house sticks etc...dinner is heaps more expensive. but i'll try it when i have money/tried other things. 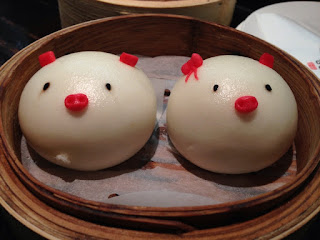 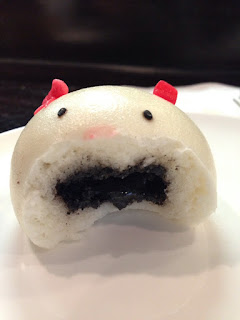 i had these vouchers for free macarons at Blackflower from o-week, but when i got there they said it was buy one get one free. oh wells, i already walked through puddles to get there..

the cheeseburger one is pretty cute. anything shaped like a cheeseburger is cute. but i didn't get it since it was chocolate flavoured, and not part of the voucher thing or something (but they would have ame more profit if i purchased that one...). usually when i buy anything, i always go for purple, then pink or blue, but the purple one here did not look appealing, and it was taro. i don't think taro would work well for macarons, for froyo yes, but not sure for macarons... 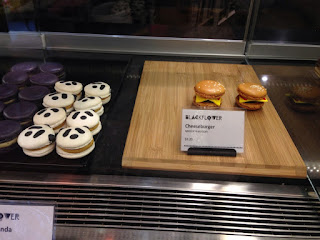 i got green tea with genmaicha (some brown rice tea according to wiki) and lychee and rose macarons. the green tea one had a chewier texture, but the green tea was nice and strong (i do like my matcha). the lychee one had lychee bits in the filling, and was very soft with a subtle rose flavour. 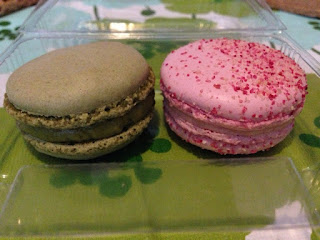 woke up at 6.15 today. got to uni at 7.45am, NEW RECORD ACHIEVED! leaving house and getting to uni exactly in one hour (: early morning still has a tiny bit of traffic on the m2, but the city is still quite-ish at 7.20ish. (:

why am i so happy about such simple foods? because i rarely go out to eat. heaps of people go out for sunday lunches/dinners, or got out to eat weekly, but i don't, so little pieces of outside food is really nice. oh, and i'm getting my wisdom teeth taken out week after next, so won't be surfacing for at least a week, and want to eat nice foods beforehand so when the pain comes, i'll think of the nice foods i've had and hopefully the pain will subside a but. lol, dat logic.
Posted by Elisa at 11:59 PM