so busy this mid sem break, but i decided to go out to see the international fleet review with mum. such a nice day today, didn't put on any sunscreen, so i endured to day wearing a cardigan. the fleet review has been in the news for a while, and they were saying how it's the biggest event in sydney since the olympics, which makes sense since nothing internationally big happens in sydney, and when other ships sail down under, well it's big.

took more pics on my camera, but these are from my phone. 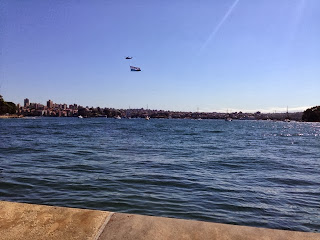 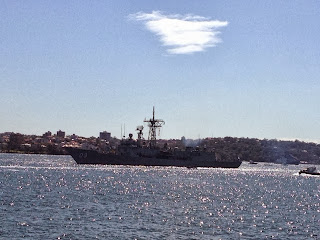 
there weren't that many at that time period, well about 15ish. i wanted to see the 21 gun salute, but that was across at Bradley's head. saw some aviator show, but that was also more based in bradleys head. it was still cool though. there were quite a few helicopters, with banners/flags, and it was really nice when it passed the sun, since their flags gave you a 2 seconds of shade. where the sun was, there were no clouds. some people fully camped there, ie picnic mats/camping chairs etc, i guess to see the plane show. those news reporters with 4 inch heels walking on very sloping grass/rocks-respect. 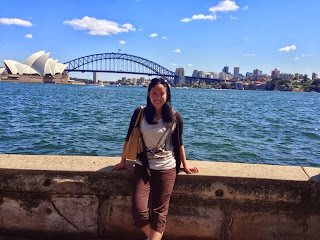 different side of sydney (:


the front side of sydney! unlike north syd where i usually go for nye "front on view", but you look at the harbour bridge from the back, so if they have words/pictures it's backwards. never been to mrs macquaries chair though, but it's got such a nice view! so much blue-ish water. also saw a dog on a speed boat with a couple-rich.

royal botanical garderns are also so pretty! i've only been to part of it if i ever had a piano exam in the city. actually went through it today, such nice green grass/garden features/newly fixed park benches. 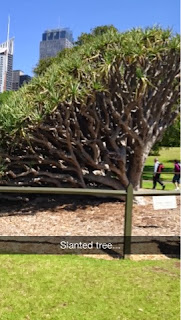 for those who don't have snap chat. 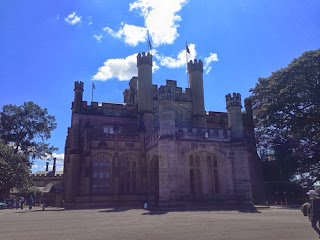 i found a castle!

why does the sky looks so blue on computer..? it's actually pretty big and quite a surprising find if you're just casually walking by. first time walking here (: if i ever have time, i would actually like to stroll through this part of the city. adventuring doesn't have to include food, it could just be


had lunch at Sukjai Thai using groupon vouchers (Tracy, i ended up using my parent's credit card to buy the voucher). pretty funky interior design. also the guy who was serving us, i'm pretty sure he's gay or bi. he was wearing short shorts, and fully stlye his hair, i think he wore contacts, and also had quite a lot of make-up for a guy. well, i guess it's normal in thailand, since there's this really famous show in thailand of guys dressing as girls (and they're actually really pretty as a girl, like 5 inch heels, dresses etc). 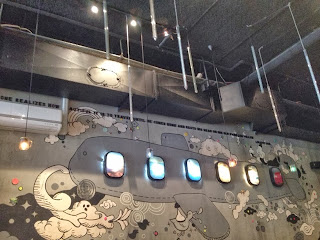 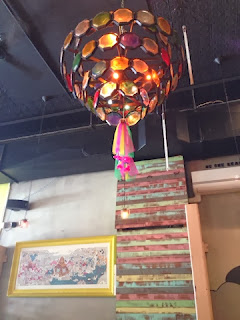 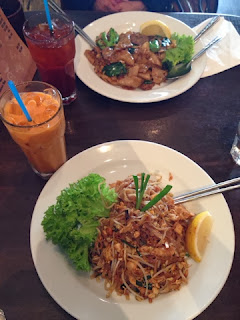 
the usual. $6 each. it's normally 13.90 a plate, but they had a lunch special of 7.90 (no drinks), so technically we didn't save much. also, it was smaller than normal, cimpared to full priced customers. however, the people next to us who also had the vouchers had a bigger portion. they were bigger/taller woman, but still....in terms of flavour, this was nice, not too heavily seasoned or oily. the pad see ew rice noodles were really soft. however, the meats of both dishes were quite bland, so you had to eat it with the noodle which has sauce. i guess it's good in a way, don't want things too salty. these two plates of thai dishes are the hottest so far (in terms of temp). service was really good. sat down and they immediately poured you water, and kept helping you pour water when they walked pass (even though we are totally capable of pouring water in a glass by ourselves). they kindly explained how their deal worked (: 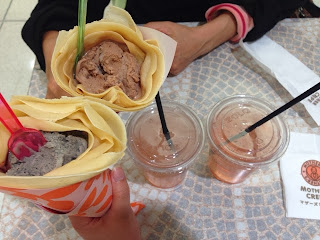 wow, how things have changed. they had two batches of group on vouchers, but the second batch had more limited stuff. and we used this voucher under the second batch of vouchers. there wasn't any green tea this time, but luckily we had it last time. there was nice plastic at the bottom to prevent dripping, also the sodas were heaps smaller. this time it was 300ml each. how do i know? well we knew we wouldn't finish the drinks since we had drinks before, so we brought a bottle w/ measurements and poured the drinks into it (: i was super full after the crepes though. it's weird, when i'm eating i don't think i'm full, but after, i feel as if i can skip dinner. 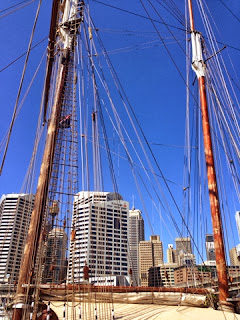 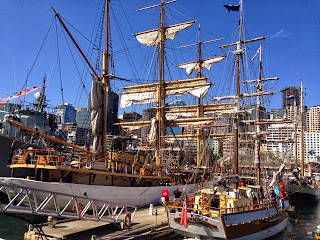 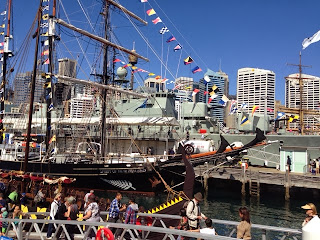 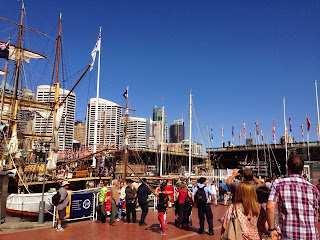 the bridge opened! didn't see any boats go past, but i guess they did it because it's fleet review and they can open it for show (:

i would have liked to go on a warship for $3, but tickets already sold out online through ticketek, only the tall ships for $20 haven't been sold out yet. ended up walking past the Australian Maritime Museum. usually they have a gate so you can't go further in, but they opened it this time, and they built extra/temporary flooring (?) wooden planks. you could tell since the wood looked quite brand new, and it's extended beyond the normal wharf.

ended up walking to Pyrmont. the star was just across the road, so Zumbo time! there were heaps of stalls/chairs set up in the grassy area for tmr. 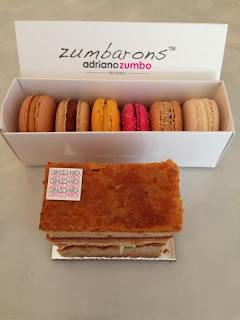 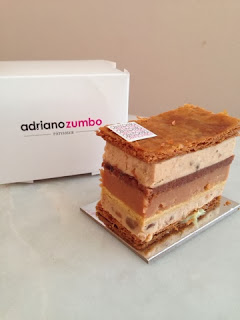 ceebs explaining how each flavour was. maybe later. i've tried every flavour except pineapple and the special ones he sometimes makes on weekends. this time i didn't use my money, so mum chose the chesnut cake, apparently chestnuts are expensive? it was so good, but i think i prefer the other one.

they have 2 more buses between 2.10 and 3.10. now i don't have a massive gap coming home if i end at 2! got through the day and managed to get home by 4 (: productive day out! time to go catch up on so much work which i haven't touched this week. been so busy.
Posted by Elisa at 11:35 PM