The last time I was at the Easter Show was 2012 when I was promoting stuff/selling stuff, and technically my first paid job and got free entry into the show but didn't actually do much since was tired and didn't have time. Going to the Easter Show almost every year in primary school and spending so much money on rides and show bags brings back good memories, but damn it was expensive. I guess going again this year, the novelty of the Easter Show has long worn off, but it was nice just walking around slowly and really just chilling there.

For a Saturday, it wasn't too crowded, especially cause it's not even school holidays yet, and the Easter weekend next weekend is always the busiest. Didn't buy anything apart from food. Showbags base price are like 2/3x what they used to be and not very useful stuff...as a kid stuff wasn't that useful but it was still fun having a show bag of random stuff. 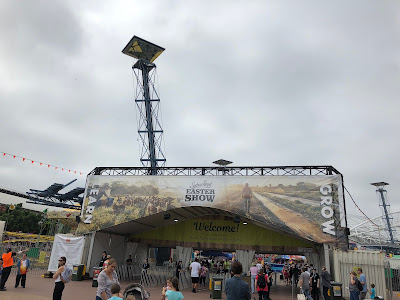 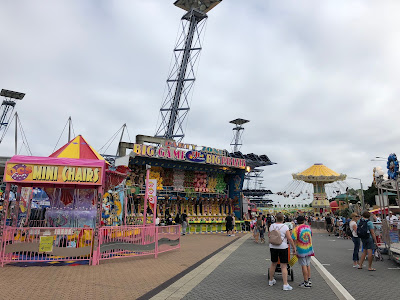 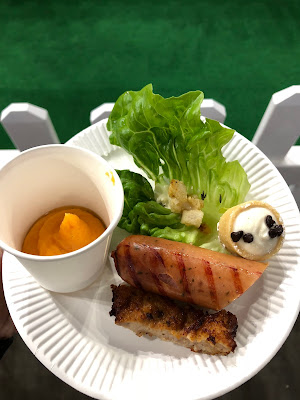 Pretty decent portion of freebies. We went again just around dinner time, and they had like a pulled pork coleslaw instead of pork schnitzel. 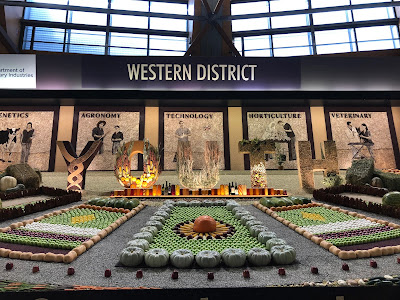 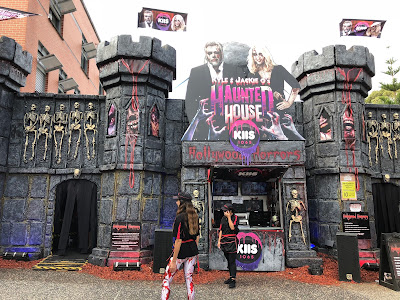 I listen to Kyle and Jackie O whenever I drive, and every year they hype up their haunted house, and I've never been before so wanted to go to this. It was 10 coupons, and each coupon is $1.10, so pretty much pay $11 to go in which isn't cheap. It takes around 6mins to walk through. As expected, a lot of jump scares which I'm pretty bad at irl. I can do jump scares in movies, but irl even at home, if something suddenly falls/smashes when it's quiet, I scream a bit...It also didn't help standing behind BW because they scare you from behind lol. They don't actually touch you, but can sort of scream behind you. The actors stand super still so you can't really see them pop out from the dark. Have to give credit to their make up artists cause all that fake blood isn't easy to do. I guess they do get paid so they're pretty good at jump scaring people. 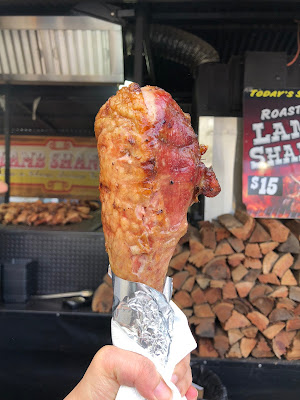 It's reminiscent of when I first went to DisneyWorld with fam, since needed something filling, cheap and quick to eat when you're crazily running around to make the most of your time lining up for rides. Luckily had quite a lot of time to eat this. It's decent and not overly salty or burnt from the BBQ. 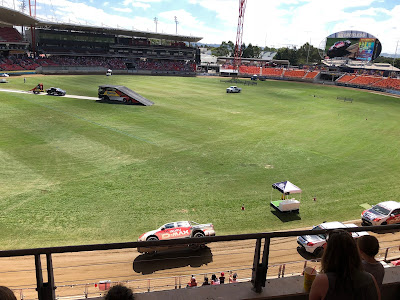 Lunch time entertainment. Was hoping to see some horse jumping but missed out. Also didn't manage to see any dog jumping or random pig racing either. 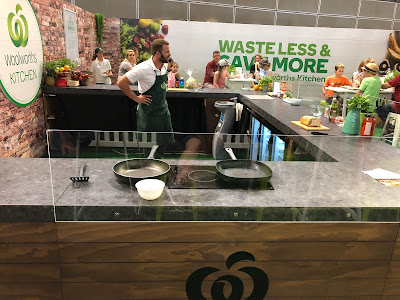 Booked a session to try some Woolies food at reserved seating

It was quite fancy with sparkling apple juice, and they were showcasing their new packet pizza bases. It's not cheap for like $7 if I heard correctly, and you still have to roll it out, wait 30min for it to proof then bake it, and you would also have to prep other ingredients. I guess it's a sort of fun thing for kids to do, but I think premed pizza bases would be a lot easier. 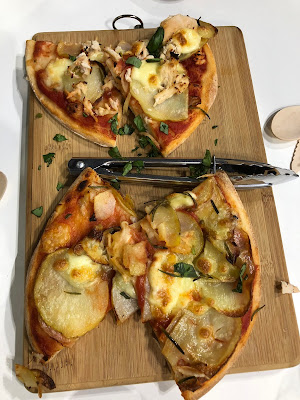 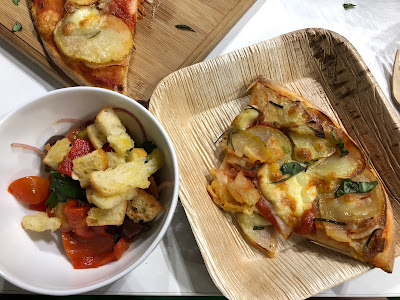 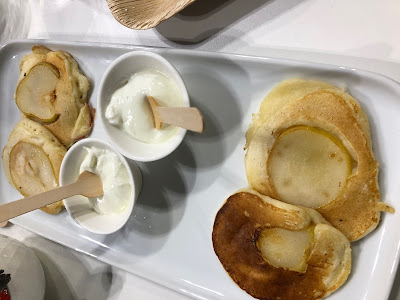 Sheep yogurt sort of tasted like Greek yoghurt but not as sour, and more creamy/elasticy in texture. They were telling people that the Odd Bunch of fruit at Woolies is still usable/edible. 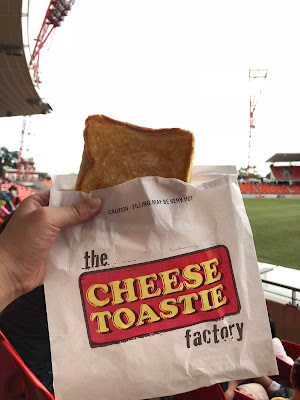 I don't think you can go to the Easter Show with snacking on one of these. Back in 2012 they used Coon cheese which was a lot more cheesy. I think this one is run by an Asian since all stores employed Asians. It's not as cheesy, but if you're after a cheap and quick feed/snack, this is the one. Food is never cheap at festivals.

Looked at the animals but didn't bother lining up to pat them, and didn't want to step in poo hidden in hay...The other artwork and cake designs etc are always nice to look at, but nothing really caught my eye to be bothered to take a photo of it. After a few, they all look the same lol. Yeah, I am no artist. 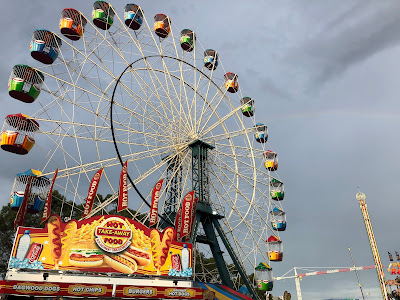 Just after the rain

It started raining just as they were starting the Opening Ceremony with the Army, Navy and Police force marching out, plus heaps of animals and some officials. Poor guys were in the rain for about an hour. Only some officials had umbrellas which were held out by army guys. The rain stopped when the ceremony stopped haha. 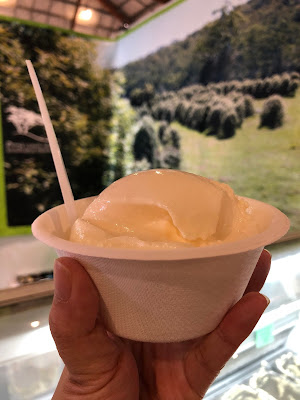 Interesting flavour and decent serving size. It was a bit soft since they just made it. 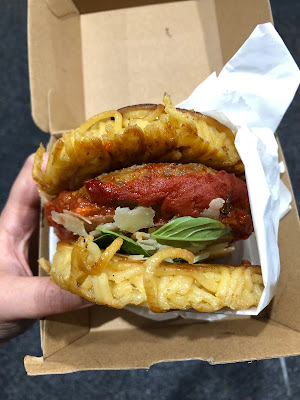 It is a novelty thing, and it is a total copy of the ramen burger. I didn't really like this bun since I don't like the texture of mushed up pasta. It wasn't really crispy on the outside, unlike the ramen burger where it's got a nice crunch (even though it is quite oily). This was oily but not as oily as the ramen burger. The meat was decent and not too fatty, and the sauce went well and cheese was fragrant, just wished there was more cheese. Price wise it is decent and is quite filling.

The night show has definitely improved. I just remembered their used to be cars, and motorbikes then fireworks. Now they even have a circus/heaps of stuntmen. I love looking at those stunt/risk taking stuff, so fun to watch. I liked how the lighting also matched the music and whatever the performance was on. 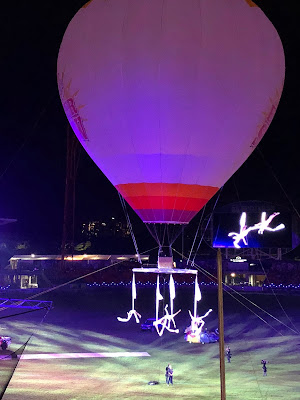 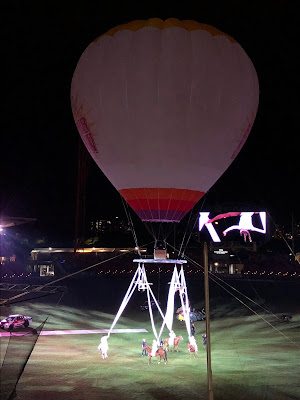 horses and people moving the other people on the ropes 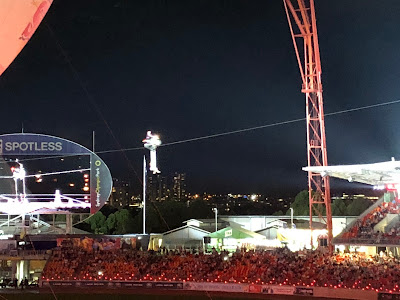 They don't zoom in at all on the motorcycle wheel. I have a feeling it's like a conveyor belt where the wheel is locked onto the string and you physically can't knock the wheel off cause it's stuck to the wire. The person just has to have good balance to fit on top of the motorcycle, and the person flying under just need to hang onto her trapeze seat thing. 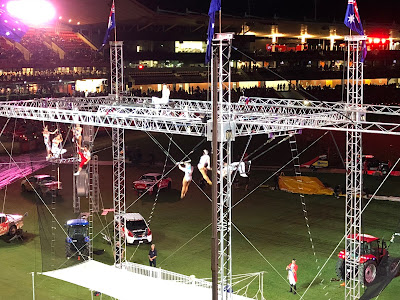 trapeze and people flinging other people 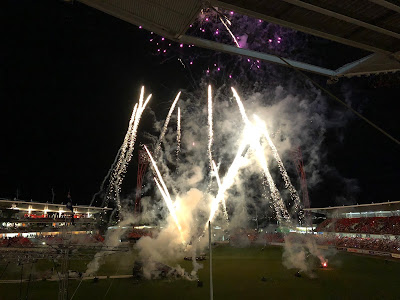 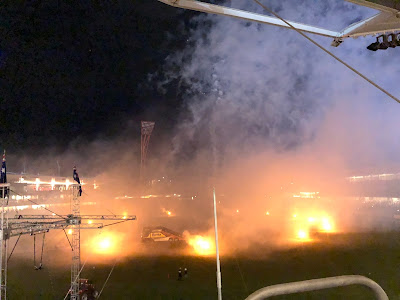 some cool thing on the floor 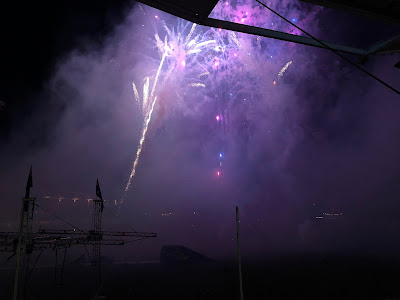 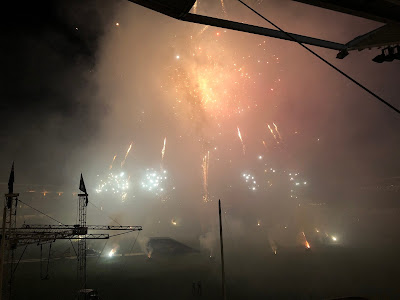 It went on for about 12mins which is pretty long. The fireworks were really loud as well 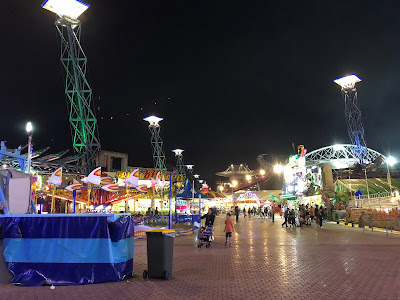 I decided to go this year because who knows when will the next time I'll ever have a Saturday off again when I start working next year. Could be another 6yr gap before I come back here, but just being yolo and making the most of my time that I have, for now.
Posted by Elisa at 11:59 PM