I always walk past this cafe when I go to Macquarie Centre since I normally park near this carpark close to Myer, so I've always wanted to try their drinks. From memory, it's on level 2, behind Country Road. Had lunch beforehand, so decided to get drinks for afternoon tea (and as a pick-me-up from a not so good week). After 3pm, the crowds die down, and can choose where you want to sit. Mostly people at this time also came for a coffee or smoothies.

There are heaps of super friendly staff here as well. 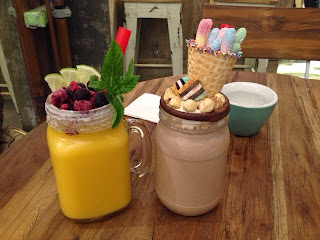 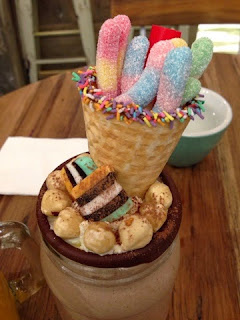 When you think about it, a typical smoothie also cost around $6/7+ at other cafes, so this place isn't too expensive for their drinks, since there is quite some detail to presentation. I had the infamous Nutella milkshake, even though I'm not a massive chocolate fan. So glad this wasn't super thick and not too milky/cream flavoured , and still had a drinkable milk-shake like consistency. You can definitely taste the Nutella in it without it being too rich. It's actually quite hard to drink and eat the toppings, so make sure you get a spoon and not waste the nuts which start to fall down after your first sip. The waffle cone is nice and crunchy, and loved the rim on it as well with the sprinkles. I'm pretty sure I was the only person who tried to attempt to eat the chocolate rim as well...Normally I don't like liquorice apart from Darrell Lea's flavoured liquorice, but the thinly sliced ones here don't have a huge liquorice flavour (or maybe the chocolate covered that liquorice taste). It was a really good drink and I'm glad I chose this one over their special for the week.

The frappe was really nice since the ice was blended in well and was definitely refreshing. Mangoes and peaches aren't in season now, but the drink didn't taste too artificial in flavour. The berries were nice in cutting down from all the sweetness.

Hopefully will be back here to try the food next time when I'm not too full.