I've been wanting to come try this place for a while, so have been saving up this place for a special occasion with a special person. So for my 25th birthday this year, decided to book the most expensive degustation dinner in Sydney (thanks Blair for the birthday dinner). I've been to a lot of food places in the past year, from fine dining (Bennelong, Catalina, O Bar and Dining, and more)/restaurants/local eats/cafes etc in Sydney, from East Coast to West Coast in America, and throughout Europe as well. Just haven't had time to do food reviews (last one was in Aug 2018 which was a backlog from March 2018), but had to do a post about Tetsuya's.

For a Tuesday night, the restaurant was surprisingly full. I made a booking around 2-3 weeks in advance, and was seated one 'row' behind the window garden seat. Apparently window tables are allocated based on reservation dates, so I guess there were some people who are more organised than me haha.

8 course degustation was $240pp. Yes, I still bring lunch to work, so I can then splurge once a year on fine dining. The food here is focused on seafood with 4/8 dishes being seafood, so if you don't like seafood then don't come. It has Japanese inspired dishes mixed with a bit of French cuisine. 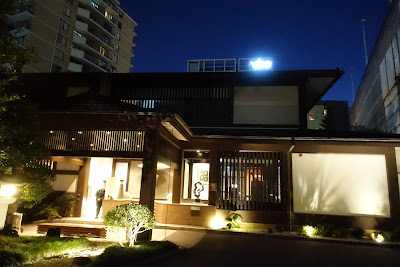 I used to always walk past this to get to my bus from the city to home on Kent St. During the day the gates are closed, so this place is hidden away. You come here for the food not views, unlike other fine dining places 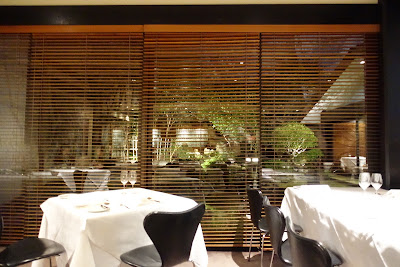 View of the Japanese style garden

Can't really see it at night and I don't think you're allowed to walk in it, but it's cute. Of course if you ever go Japan, the original country is always more impressive. It's cute how they try to transport you to Japan. 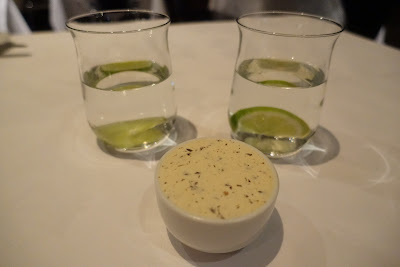 We ate pretty much almost all the butter. I never eat butter, except at fine dining. It was so light, and whipped well so very spreadable, but the truffle flavour was so intense and you could see so many bits of truffle in it. Makes my truffle salt and truffle oil at home seem like nothing. Even if you had a blocked nose, you would be able to smell the truffle. They offered sparkling, still or filtered water (no tap water option cause fine dining haha). 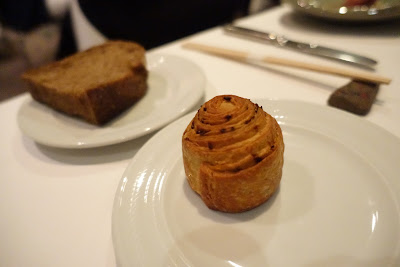 Bread options were Kombu scroll, rye or white sourdough. All of them were so delicious. The scroll was extra flaky and easy to pull apart, and sourdough had a nice crunchy crust without being chewy. Not sure if I filled up from the bread, butter and water... 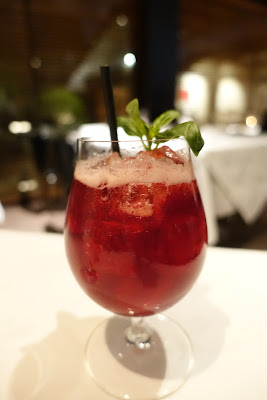 Chose this one since it seemed to fit with the Japanese theme. It tasted like slightly sour cherries, and not sweet. It was nice but not one of my favourite cocktails. 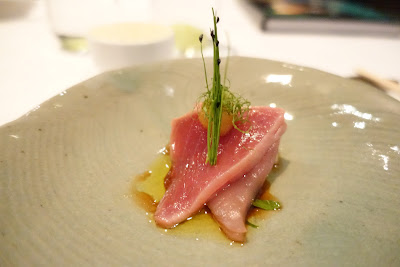 Tuna with daikon and wasabi

You can definitely tell this fish was so fresh and the flavours weren't overpowering the fish flavour. Could hardly taste the wasabi which was good, since I'm not a big fan. Daikon gave it that extra bit of freshness for the dish. 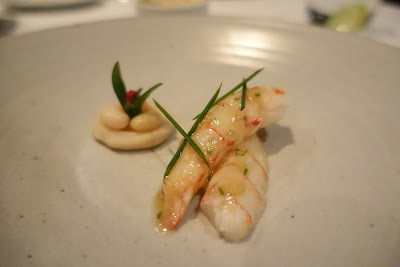 Scampi perfectly cooked and full of flavour, and moving onto a warm dish. I couldn't really taste the coffee, but it gave that slight bit of acidity to cut through the butteriness of the scampi. The puree on the side help emphasis the smooth texture of the scampi. 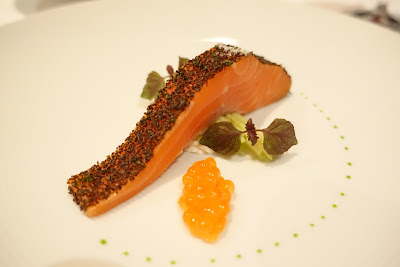 Signature dish: confit of ocean trout with salad of apple and witlof

Wow, this dish lived up to the hype. The softest trout ever which melts in your mouth, perfectly seasoned with the kombu on top. Your knife just glides right through, and this is indeed my favourite seafood dish. Loved the crunch from the apple salad hidden underneath for some texture and slight sweetness. The caviar also gave it a pop of flavour. The parsley oil looked pretty on the plate, but I couldn't really taste it. 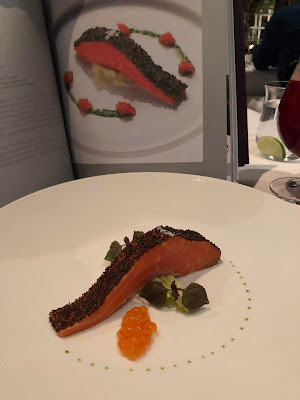 Apparently, this is the most photographed dish in the world. Mainly because it was invented back in 1987. Most restaurants weren't even opened by then, and most chefs change their menu and remove signature dishes (like the Quay's snow egg) from time to time to keep people coming back. This dish has stayed on the menu since it was first created which explains why it's the most photographed dish. The recipe photo shows more parsley oil and caviar, but I guess that book was published around 2000, and 19 years later, inflation etc so they just cut out the extra bits without sacrificing the quality of the trout. 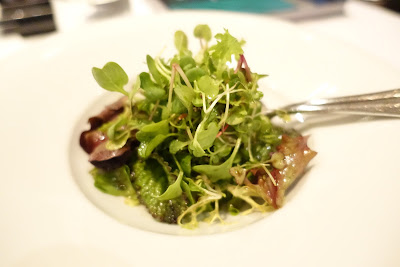 salad to go with the trout

Salad had a nice dressing, I don't mind acidity, but some may find it a bit too acidic/bitter. Waiter suggested to have the fish first then have the salad as a side. I found the salad flavour to a bit overpowering, so I just had the salad separately after I finished the trout. 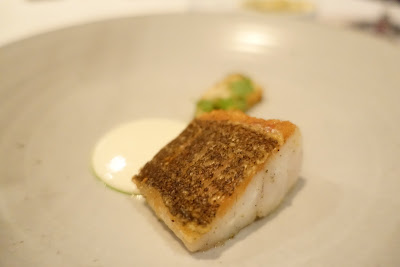 Moving onto the first hot dish where the plate was pre heated to preserve the warmth. This piece of fish was quite small, but again cooked to perfection. The skin super crispy and again the fish was very soft. It looked like a lot of sauce, but it was the perfect amount. This garlic sauce is better than El Jannah's (which is already one of the best for just cheap eats). The sauce was an emulsion, so it was super smooth without being too garlicy. 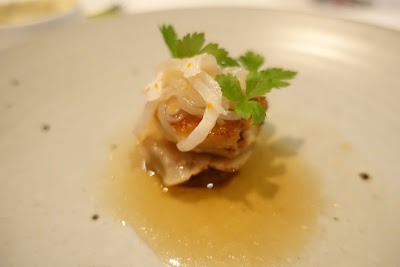 The first of the two meat dishes was this confit chicken which was really moist and smooth, and packed full of flavour with the accompanying jus. The orange was a nice element to the dish bringing some depth of flavour, rather than just savoury. 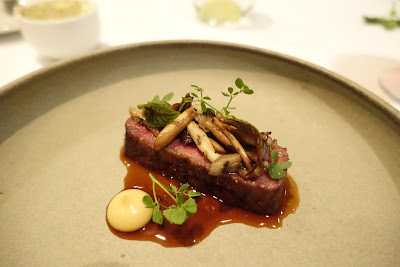 I loved the yuzu sauce on the side, highlight of the dish. It gave a lovely acidity to cut through the richness of the beef. The meat was perfectly cooked and loved the jus sauce. Mushrooms were plump and juicy. Good end to the savoury dishes. 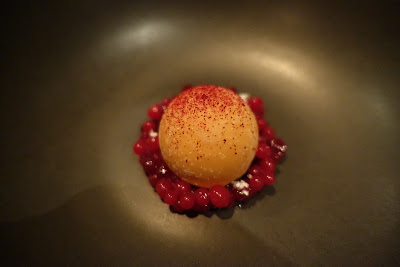 Blood orange and beetroot sorbet with layer of white chocolate

This was the perfect palate cleanser, and the sourness from the sorbet really cut through to literally cleanse the savoury taste from previous dishes. A thin piece of white chocolate covered the sorbet to help balance the acidity, and on the side were some pearl like things. Apparently they use some science to make them. They're soft and not chewy like your usual tapioca pearls. 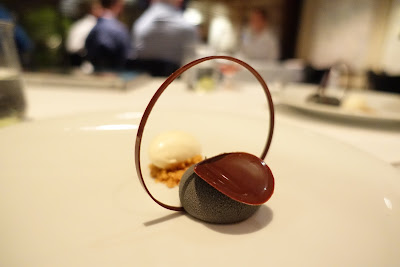 Chocolate stone with honey and milk

The dessert was nice but not amazing compared to other fine dining desserts I've had, wasn't expecting much from desserts since I was coming here for their seafood. The chocolate stone had a sort of milk ice cream filling inside and was really soft and not rich. Loved the quenelle of ice cream on the side with some crumbs for texture. The tempered ring of chocolate made the dish more fun. Could definitely hear the crack as your spoon cut through it. 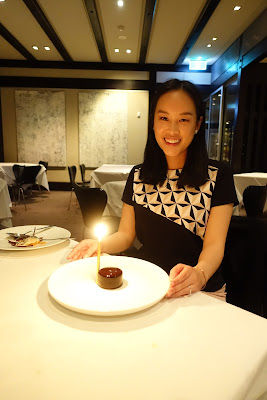 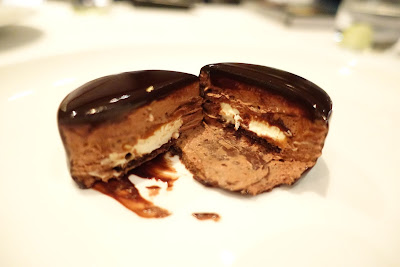 The mousse cake was rich but not too sweet. I'm not a chocolate person, and if I do eat chocolate, it's always dark choc. The mousse was predominately dark choc which I loved, and just some sweetness from the white choc inside. 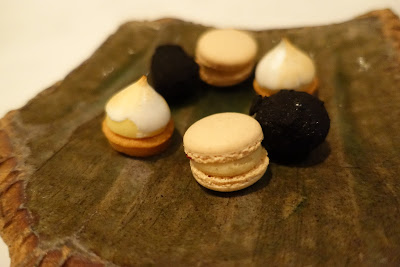 I love these petits four, especially because it wasn't just chocolate. The chocolate truffle was my favourite, since it looked like truffle, but inside was this delicious black sesame filling, what a thin outer shell of chocolate. The macaroni wasn't overly sweet since the mascarpone was light and with a mild raspberry filling. Loved the acidity from the citrus tart as well with a thin layer of meringue. 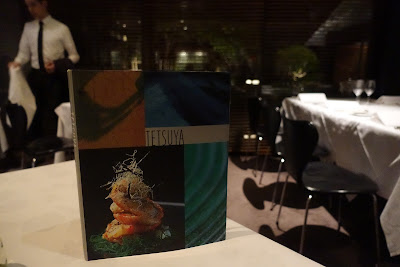 Thanks Blair for buying this book all those years ago (way before we met and even he didn't know who Tetsuya was when he bought this book around 10 years ago). So lucky we brought it along with us, since we got it signed! (Well Tetsuya was overseas but they swapped our copy with a signed copy in their stock).

Me being weird even though it's a fine dining place, I started taking photos of the trout dish with the book, and the usual taking a million photos before I eat, even though these days they just get stored since I don't really have time to upload to my food Instagram account or blog about it. Halfway through the meal a waiter said to follow him, and to take our phones. He ended up showing us into their kitchen! First time seeing a commercial kitchen (not through a window or on MasterChef). We were literally on the pass, and seeing all the chefs plate up. Inside was really big, and they explained how they don't use computers, since everyone eats the same 8 courses, so they just cross it out as you complete a dish then make the next one. So cool seeing the head chef in work as well. 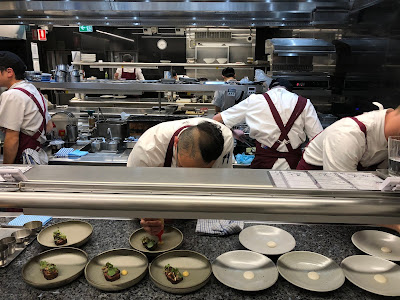 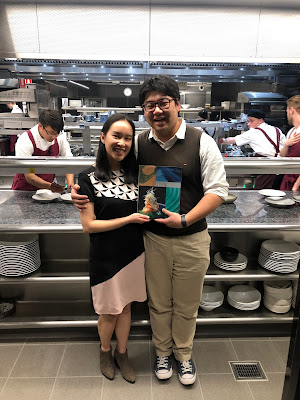 Bit shocked at the invite into their kitchen, still in awe

Service was impeccable throughout the night as you would expect for a fine dining restaurant.  We did tip them extra since they went above and beyond for our dining experience. Although Tetsuya himself wasn't there (he was to return the following week, but these dining places are more once in a life time not weekly dining so we wouldn't obviously go back just to see him), we were just shocked that they let us have a peek into their kitchen and signed our book! Definitely a birthday dinner to remember.